While browsing through the English Oxford Dictionary; it was shocking how many “new” words I was unaware of. Neologism is based on the creation of new words. For example, words like “Copernicium” and “Adipokine”, are some of the words I didn’t know before. Moreover, other terms that I found interestingly weird are “Happy slap” and “Jeggings”. First, I was actually quite surprised that these words exist in the dictionary. And second, I realized that some of the recently added words are either related to Science or to the Media. For example, the definitions of terms like “Photo bomb”, “happy slap” and “Selfie”; are related to technology and smartphones. Many other words such as “Twerking”; had an already know conation before, but it was revived after Miley Cyrus’s excessive performance of it in public.

If someone selects the Caribbean Region in the “Categories” section in the OED, and then chooses “Jamaica”; a list of 174 words will appear. I noticed that these words entered the dictionary in between the 18th and the 21th century. As I mentioned in the previous section Neologisms, many new words entered the OED in the 22th, which is not the case of this particular region. The last recent word that was entered; date from around the 1980. The usage of English in this region must be insignificant. The words that I found are either related to food, fruits and drinks. There are also dozen of words associated with plants, and especially words that are linked to the practice and culture of the Jamaican country. There’s an excessive use of words related to music and dance. What’s interesting about it is that the word “Rastafarian” is present in many definitions, which is the Abrahamic belief that was developed back in 1930 in Jamaica. Nowadays, many fans of the Jamaican singer Bob Marley, use this particular term to express their appreciation of his music.

In this last part, I picked the Caribbean region and the “Performing Arts” as a subject. 12570 results were found. As seen below, the periods when certain words were very important for the OED; range between 1850 and 1899, and between 1900 and 1949. 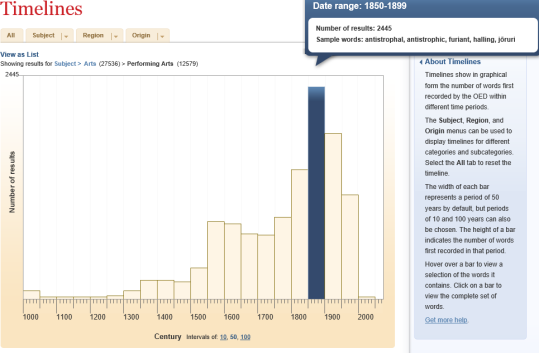 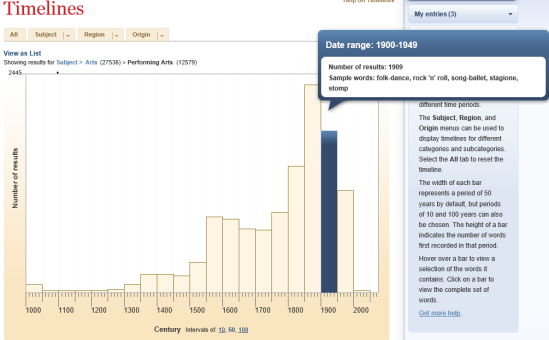 In this Graph, we can see that the number of results of the data range 1900 and 1949 decreased, comparing it with the first graph. Moreover, the sample words are remarkably interesting, especially because they are familiar Performing Art words, unlike the first graph words.

In addition, the sample words mentioned in this region, during 18th and 19th century are in French. For example, some of the French words are  “brisé” and “pas de basque”; however,  the number of results is not significant, and are no longer used in the next decades, especially by new words emerging.